BJP leader, Union Home Minister Amit Shah was scheduled to visit the temple city Tirupati on March 4. He was supposed to be on a two-day visit to the city to chair the meeting of the Southern Zonal Council.

As a sudden development, it has been widely reported that Union Home Ministerâ€™s Tirupati tour was canceled. However, the reasons behind the sudden cancelation were not known.

As per the earlier schedule, Amit Shah was supposed to chair the Southern Zonal Council meeting. Chief Ministers of six states and Lieutenant Governors of Andaman and Nicobar Islands and Lakshadweep were invited for the meeting.

The main agenda behind chairing the meeting is to discuss the issuing the issues and disputes among the states. The Telugu states which are having water sharing and other disputes will raise their issues in the meeting.

Amit Shah was also scheduled to meet his ally Pawan Kalyan in Tirupati ahead of the by-polls and discuss several issues pertaining to the by-elections, like candidate selection and others.

With the sudden change in the plan, the Janasena cadre had to wait for a few more days to get clarity on whether the alliance will field Janasena or BJP candidate for the forthcoming elections.

On the other hand, media reports are abuzz that Amit Shah canceled his plan at the last moment as he is likely to visit the poll-bound states. 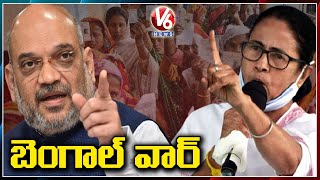 There are 28 YCP cats in Parliament, criticizes Lokesh