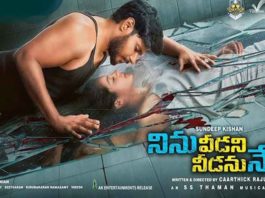 What if you see someone else in the mirror? It’s a spooky situation to imagine and NVNN premise was built around it.

Arjun (Sundeep) and Madhavi (Anya) survives an accident and weird things begin to happen from that point. When Arjun looks into the mirror, he sees Rishi (Vennela Kishore) and the same happens with Madhavi too. She sees Diya in the mirror. What is the mystery behind it? The couple seeks the help of a psychiatrist (Murali Sharma).

Sundeep Kishan is someone who keeps it subtle even in dramatic situations. That subtleness didn’t look convincing in some scenes, but on a whole he has done a decent job. Anya Singh did alright with the help of Chinmayi’s dubbing. Vennela Kishore does something different from his usual stuff and he is good in this one. Murali Sharma is convincing and Posani’s humor worked in a couple of scenes.

Director Karthik Raju (spelled Carthick Raju) has come up with a very innovative idea and no wonder Sundeep is bowled over by it. We have seen numerous horror comedies in recent times, but this is different from the rest. It is a genuinely original idea, but the director didn’t have clue about what to do with it once the twist is revealed.

Songs are absolutely not needed, but still they squeezed in a couple into the narrative. Thaman’s background score is fine. Cinematography is good and in tune with the spookiness of the script. Editing is uneven. Production values are decent.

Ninu Veedani Needanu Nene has an interesting premise that instantly grabs your attention once the actual story begins. There is a prologue before the film gets to the actual plot and it is straight out of a regular commercial film. That part seems absolutely not necessary, but there is a link in the second half, which makes sense. The scene where the lead pair realizes that they are seeing someone else in the mirror sets the mood for NVNN and what follows is an engaging and entertaining sequence of events, albeit some confusion here and there.

The real jolt comes at the interval where the real twist is revealed and NVNN ends its first hour with a bang. But that is exactly where the director lost his grip over the narrative. He was effortless until the two (real person and the mirror image) don’t communicate with each other. Problem starts when the two begin to converse that not only kicks out the fear factor, but also leaves the director clueless of how to take this forward. A pointless and boring flashback is shown for reasons best known to the director.

Later the film turns into a melodramatic sob-fest preaching the value of parents in one’s life. Director needed to find a strong reason for the ghost to leave the body and all he could think of is parents sentiment, which is ridiculous. How can one end a film on something that has no part in the main plot until that point. NVNN made a mess of its interesting premise that could have created sensation if done right. All Sundeep and Karthik manages is to make a half baked mystery horror film that only shows flashes of brilliance in bits and pieces.

NVNN has a fairly engaging first half but suffers due to second half syndrome. This cannot get the thumbs up from genre lovers too. 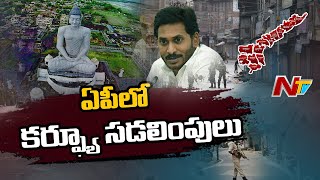 UN: Over 270 migrants rescued and detained in Libya