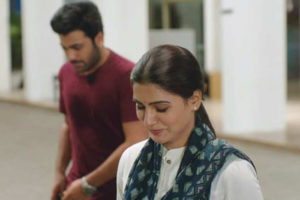 Queen bee Samantha’s latest film ‘Jaanu’ got a terrific response from the audiences though the fact is that it is not decorated with any comedy or commercial elements including special songs. With this Samantha has scored three back to back hits including Majili, Oh Baby and Jaanu, thus a hattrick.

However, all that project that is happening around Samantha’s superstardom and attributing these films as her success is not being liked by a section of audiences. Barring ‘Oh Baby’ which has Naga Shourya in a negligible role, the film Majili has Naga Chaitanya playing the lead, while Jaanu has Sharwanand doing utmost magic. So how come the craze went Samantha’s way?

But those heroes don’t have a huge social media following as Samantha, and hence the actress is able to steal all the craze from them, as most of her fans term thees movies as Samantha-centric films. Otherwise, it is very wise to say that Jaanu is equally Sharwa’s victory as he too delivered a knocking performance. Same is the case with Naga Chaitanya for Majili.

On the other hand, Samantha’s entry is being celebrated in theatres like how fans did it during Majili where she enters in the interval and in Oh Baby where she came 20 minutes later. Even in Jaanu, she comes into the movie at a later point of time only.

Another Covid vaccine scam in the offing: Revanth Will there be a truce between KCR, Etela?