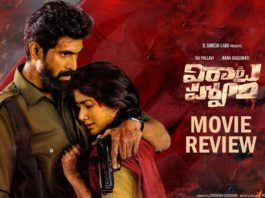 Sai Pallavi and Rana starrer “Virata Parvam” has generated a tremendous craze since the first teaser was released two years ago. The hype around it reached high with Sai Pallavi coming under the spotlight recently. Actors like Venkatesh praised Sai Pallavi and declared that she would walk away with a national award. Such has been the buzz.

Has the film really lived up to this hype? Let’s find out…

Story:
The story is set in the 1990s. Vennela (Sai Pallavi) lives in a village near Warangal. She falls in love with Aranya aka Ravanna (Rana) as soon as she starts reading his poetry. Ravanna is a committed Naxalite leader who shuns all bonds.

When Vennela comes to him running away from home and expresses her love, he doesn’t reciprocate. But Vennela is ready to join in his cause, is even ready to die for him.

Will their love succeed when police are planning covert operations to nab Ravanna and when other Naxal leaders express their reservations about Vennela joining their team without due process?

Artistes’ Performances:
To say that Sai Pallavi is terrific is an understatement. The immensely talented actress lives in the role. She is the soul of the film. Frankly, Rana doesn’t get much space in the first half of the film. It is her journey and her performance that dominates throughout.

To his credit, Rana lets Sai Pallavi do everything. He plays his role with all sincerity. However, his appearance (as the film was in the making for a long time and due to his health issues) lacks consistency.

Among other actors, Sai Chand, Nandita Das, and Zarina Wahab give the best.

Technical Excellence:
Music director Suresh Bobbili has come up with songs that flow with the theme. The cinematography is another excellent aspect of the technical prowess the film possesses. Dialogues are neat. The editing should have been sharper.

Analysis
In Mahabharata, Pandavas in their exile get prepared for their final war. This chapter is known as “Virata Parvam”. There’s a connection between Mahabharata with the theme of director Venu Udugala’s film. Hence the title.

The film is primarily a love story but we see other points like Naxalism, covert operations, and ideological differences. Inspired by the life of Sarala, Venu Udugula wrote the story of “Virata Pravam”. Sai Pallavi’s character is loosely based on Sarala, whose love story with a Naxalite leader became a topic in the bygone era.

The first half of the film is devoted to Sai Pallavi’s efforts to reach Rana, her travails, and tribulations. This part has some engaging moments, but it is too lengthy and repetitive.

As we have said before about the title, the real drama in the story happens when Sai Pallavi joins Rana’s team and that takes their story to a dramatic turn leading to an explosive culmination. The climax portions have made a huge difference.

The biggest problem is that the director has narrated more like a docu-drama than as an emotional film. Films with a Naxalism backdrop in the past have explored much of the content that we get to see in “Virata Parvam”. Krishna Vamsi’s “Sindhooram” featured many such moments. So, Venu Udugula should have curtailed them and shifted to the real drama.

Rana’s portions as a Naxalite leader are superficial. The shootout episodes are substandard. There is no stunning action. Nor are they unique. Agreed that the sole intention of the story is not to package it as an action drama but as an emotional story. Then, the shift should have been in that way.

The suspicious entry of Sai Pallavi and the connecting scenes are handled interestingly in the final part. But the same deft handling goes missing in other parts. Hence, the overall effect, despite the film’s honest treatment and efforts, is not that effective.

Venu Udugula provides the best part in the final episode and a couple of emotional moments. Though he has avoided clichés in many places, he should have made it tighter for a better effect.

On the whole, ‘Virata Parvam’ has the right intentions, honest narrative, terrific performances, and above all the magical Sai Pallavi. But it also misses the opportunity to provide a riveting drama. Despite honesty, the film is a mixed bag: some portions are good, some are so-so. It may not appeal to regular audiences due to its docudrama nature. 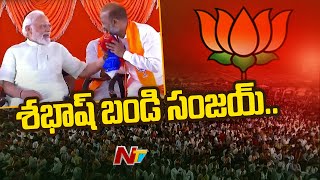 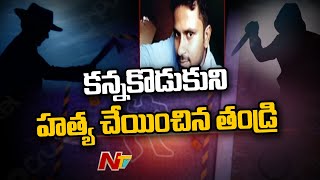 Ram Getting Career Best Figures For ‘The Warriorr’!