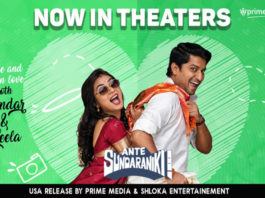 After an action drama like ‘Shyam Singha Roy’, Natural star Nani is back with a light-hearted romantic comedy film named ‘Ante Sundaraniki’. Beautiful actress Nazriya Fahadh is the heroine and there are a lot of noted artists playing important roles in this flick. Written and directed by Vivek Athreya, the movie garnered a lot of buzz right from the beginning. The songs and theatrical trailer impressed the viewers a lot and promised an entertaining film. Let us wait and see if the film delivered as promised or not.

Sundar (Nani) is a Brahmin guy who has an overprotective father (Naresh). He controls every aspect of Sundar’s life. Sundar falls in love with his childhood friend Leela Thomas (Nazriya) under interesting circumstances. But both their families are very strict when it comes to religion. Sundar and Leela devise a plan filled with lies to get married. It leads to a lot of confusion and they are forced to face a lot of consequences. Will they get married and have their happy ending? This will be answered on the big screens.

Romantic comedies are often considered as simple movies but they need a lot of skillful writing. Most of the romantic comedies have a happy endings and revolve around a similar plotline with different backdrops. It is very important for such films to get the screenplay right as there is a high chance of proceedings turning too predictable and the viewers getting bored. ‘Ante Sundaraniki’ is also a story about two lovers who try to get married despite having strict and rigid parents. It is a simple story but the way Vivek Athreya narrated it deserves a lot of appreciation. He did everything he could to narrate this regular story in the most interesting way possible.

He used a non-linear screenplay in the first half which made the film a bit slow but it gave a fresh feel to the audience. He started the film with an airport scene and explained why both hero and heroine decided to take off together in an engaging manner. He made sure that the audience got entertained by inserting some comedy scenes at regular intervals throughout the first half. Along with Vivek’s writing, it is Nani’s ease and comic timing which held the film together. He delivers once again in an entertaining role and gets into the skin of the character. Despite all the positives, the first half is quite slow and a lot happens in it which makes the viewers feel a bit restless at times. The slow-paced narration especially in the first forty minutes may work against the film. The director decided to take his own time when it comes to introducing the hero & heroine along with their family situations. Though it was necessary for the story, the film slows down drastically. Things get interesting after that and the intermission arrives at the right time.

The second half is filled with a lot of confusion drama and it leads to a lot of entertaining episodes. The twists and turns keep the audience invested while the natural comedy leaves the audience in splits most of the time. The last twenty minutes of the movie becomes an emotional ride but it is the performance of Nani, Nazriya and seasoned actors like Rohini who make it very convincing. The makers did not go for a grand ending and kept things quite simple which is appreciable. ‘Ante Sundaraniki’ is a decent watch if you ignore the film’s slow pace and lack of addictive songs. It is a neat entertainer which ticks all the right boxes. Nani’s effortless performance and Vivek Athreya’s writing are the biggest strengths of ‘Ante Sundaraniki’. The movie is surely going to impress families and people who love classy romantic comedies with good entertainment.

‘Ante Sundaraniki’ is a Nani film through and through. He dominated everyone and proved why he is called a Natural star. He is effortless in comedy scenes and it is his timing that elevated a lot of portions in the movie. He is undoubtedly the heart and soul of this project. He did great in the emotional scenes too which will connect with the audience.

Nazriya is a delight to watch on the screen. She is a talented actress and did complete justice to her role. Her chemistry with Nani is very adorable and it is one of the biggest USPs of this movie. Naresh did a fantastic job and pulled off both comedy and emotional acts convincingly. Rohini as Nani’s mother is just brilliant. She emotes through her eyes most of the time but delivers the most when needed. Nadiya is perfect as Nazriya’s mother and Azhagam Perumaal did very well as her father. Anupama Parameswaran appeared in a special role and she was decent. Harshavardhan’s comedy scenes with Nani came out wonderfully. Rahul Ramakrishna got a brief role but entertained the viewers.

Sekhar master’s son Vinni did a very good job as young Nani and his dances for Megastar’s songs are worth mentioning. The girl who played the younger version of Nazriya was quite good too. The rest of the cast was okay.

Vivek Sagar’s music definitely enhanced the film’s output. His scores suited the film’s backdrop and narration style. He did a very good job in the background score department but none of his songs in ‘Ante Sundaraniki’ have repeat value. The cinematography by Niketh is perfect. The visuals are quite natural and help the director’s vision. The artwork deserves a lot of appreciation as the orthodox Brahmin house and Christian house have been designed very well. The editing is fine but the film is slow at parts which should have been taken care of. The movie is nearly three hours long which is quite rare for a romantic comedy. The production values are good by Mythri Movie Makers. They did not go overboard with money but spent where it was required.

Vivek Athreya who proved his talent with ‘Mental Madhilo’ and ‘Brochevarevaru Ra’ is in full form once again for ‘Ante Sundaraniki’. His writing is brilliant and he extracts the best out of every artist. His dialogues in a few scenes touch you. He did not make the comedy look forced and tried to keep it as natural as possible which worked well. Had he made the proceedings a bit quicker in the first half, ‘Ante Sundaraniki’ would have been nearly flawless.

Verdict: ‘Ante Sundaraniki’ – A Fun Entertainer To Enjoy This Weekend Chiru says Godfather is necessary for his image