Talented hero Allari Naresh is celebrating his birthday today and the makers of his upcoming film ‘Itlu Maredumilli Prajaneekam’ unveiled the teaser as a special gift. The pre-teaser shows the hardships they endured during the film’s production. Now, the teaser showcases that it is going to be another serious drama from Naresh after an acclaimed movie like ‘Naandi’.

Set in the tribal land of Maredumilli forests, Naresh will be seen as an election officer who goes to that forest area on duty. What happens during his visit and what are the truths he discovered about tribal people forms the main plot. The visuals look impressive and Naresh seems to have come up with another good performance once again. Aanandi will be seen as a tribal girl while Vennela Kishore plays the role of hero’s sidekick. Sampath Raj will be seen as a strict police officer and there are a lot of artists in this flick.

Also, the teaser reminds people of ‘Newton’ starring Rajkumar Rao but there is more action part in this flick.Written and directed by AR Mohan, ‘Itlu Maredumilli Prajaneekam’ is produced by Razesh Danda under Hasya Movies in association with Zee Studios. Sricharan Pakala who composed music for ‘Major’ recently is working on this project too. Abburi Ravi penned the dialogues while Raam Reddy is the director of photography. Brahma Kadali is the art director while Chota K Prasad is the editor. 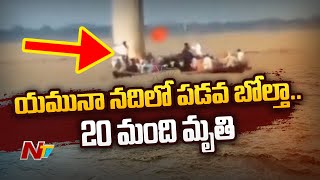 At Least 20 Lost Life as Boat Capsizes in Yamuna